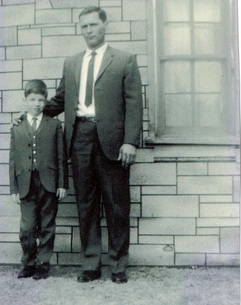 ﻿Humble Beginnings...  were found in the rural community of Cable Wisconsin with a population hovering around 280. Jeff was born the son of loving parents Walter and Nellie Larson way back in the year 1957 shortly after the glaciers receded from Northern Wisconsin, and the last Cheesehead Woolly Mammoth went extinct .

Jeff's family attended a little white country church in Cable where at age six he accepted Jesus into his Heart. Ironically, while sitting in 'The Back Pew' during Summer Bible School.

As a child Jeff loved cartoons and would spend hours at the kitchen table or on the floor in front of the television drawing popular cartoons (with his favorite being Popeye the Sailor man), or cartoons of his own creation. Just think how far Jeff has come? 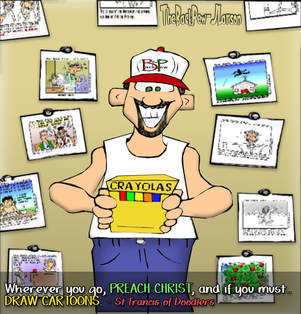 This was the very real beginning for Jeff's faith journey. Church, family lived out in the quiet rural setting of Cable Wi was a priceless heritage for Jeff., and living in a town of 280 people is about as rural as it gets..

There are NO traffic lights, rush hour traffic exists between 7:59 AM until 8:01 AM, and returns from 3:59 PM through about 4:01 PM. and Traffic jams were only mythical folklore shared regarding trips to the big city told to scare the locals from leaving town.

Now since Jeff neither liked to hunt or fish.. it was time for me to move to the big city so he crossed the border into Minnesota (border control problem?) where he learned to live amongst both Minnesotans and gophers since around 1980. In this time Jeff got married, had some kids, owned a pet or two and now 5 grandkids! Life is good! 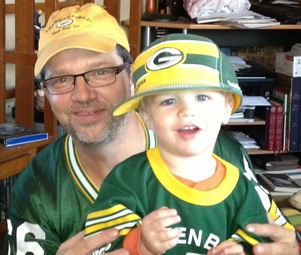 ﻿﻿﻿After Wisconsin Jeff  changed from working as a logger wielding a lo-tech but powerful chainsaw to careers in computers, and sports officiating all while still drawing cartoons.

In the late 1990s, so many years removed from sitting in that  literal Back Pew in 1963 Jeff  returned to The Back Pew putting his single panel faith cartoons in a collection entitled cleverly 'The Back Pew'.  Then in January 2000 Jeff launched The Back Pew website to share  Clean Humor and God's Truth via cartoons and words.

Jeff explains, The Back Pew title comes not only me accepting Jesus into his heart in that literal Back Pew in 1963, but also his experiences as a youth sitting in church with friends typically as far back in our church as possible.  If there was a Back Pew, they were in it.

The moral of Jeff's story is .. Serve God uniquely as He has wired you. Jeff serves God by coloring  between the lines and prayerfully sharing cartoons as a ministry resource for others.  Jeff daily seeks that sweet spot between God's Glory and Man's Folly with a cartoon.
and to know Jeff, you need to understand adult life has struggled with back pain culminating in two surgeries one in  August 2021 the other in April 2022 to repair impingements causing nerve damage/pain and affecting muscle function.

Next..  after the 2nd back surgery in April I had a staff infection in the surgery incision requiring a third surgery to clean things out, followed by a one week hospital stay to get the infection under control, then another 6 weeks with a pik (or picc) line feeding me antiobiotics 24/7. Now in August 2022, I turned 65 and believe these surgeries and with all the doctor care and all the kings horses and all the kings men .. I am feeling much better.  PTL

This is more information than you were looking for, but of course I have cartoons like other people have photo albums.
Jeff's pray is for God to bless and use each of you as you are uniquely wired. and in ways that are beyond your dreams.
More Toons and Images from Jeff's Life
©2019 Jeff Larson - All Rights Reserved